Thank you to our Spring Quizzers 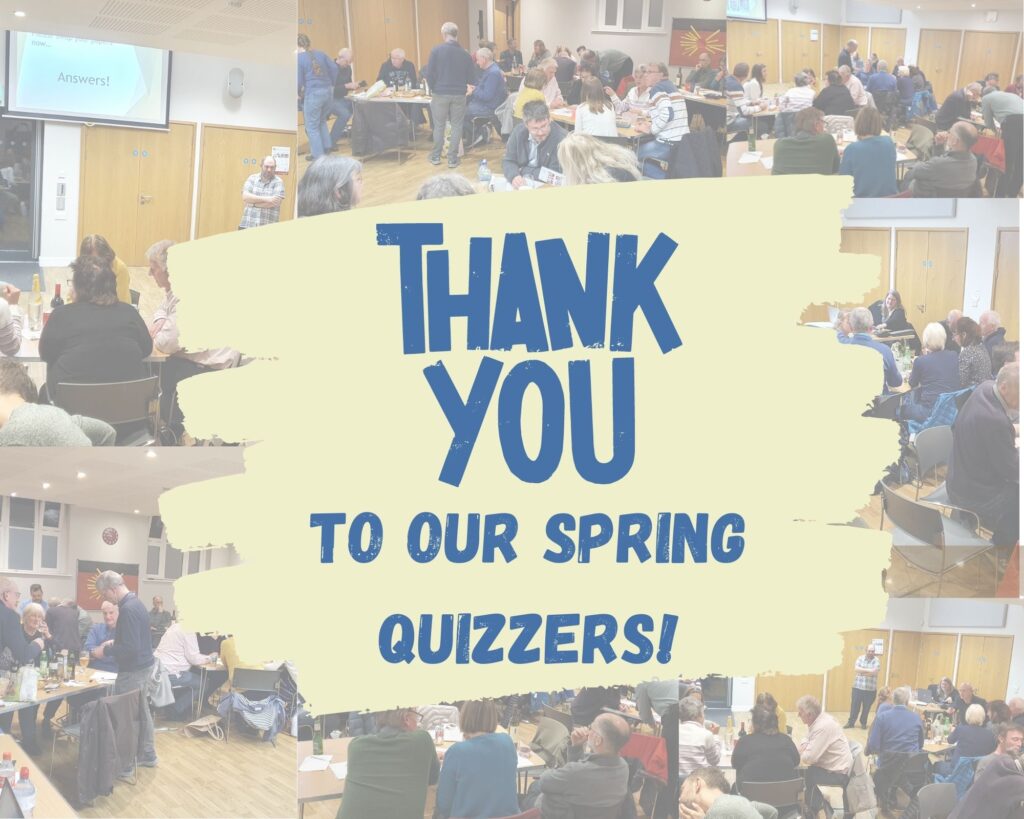 On 23rd April, five teams battled it out at the Cogwheel Spring Quiz, testing their knowledge in rounds that covered literature, movie music, Nobel Prize and Booker Prize winners, sport, […] 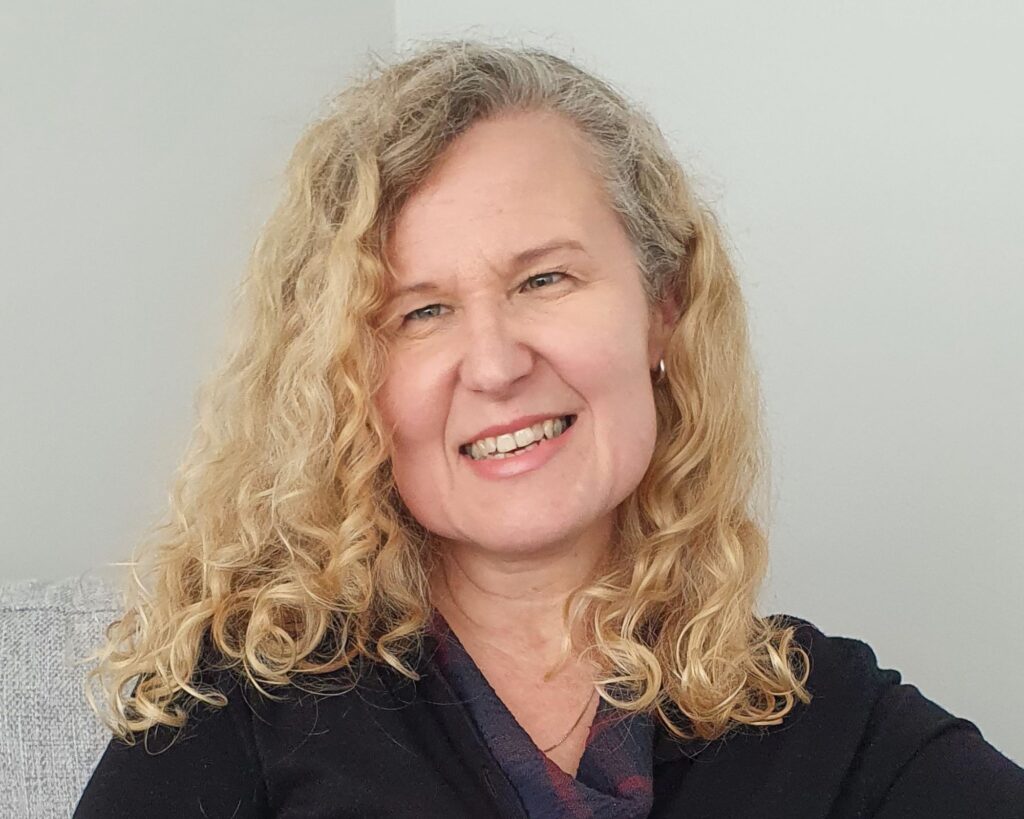 In April we were sad to say goodbye to our Head of Counselling, Esther McNeill. Esther had been with Cogwheel for 12 years and had contributed hugely to shaping Cogwheel […] 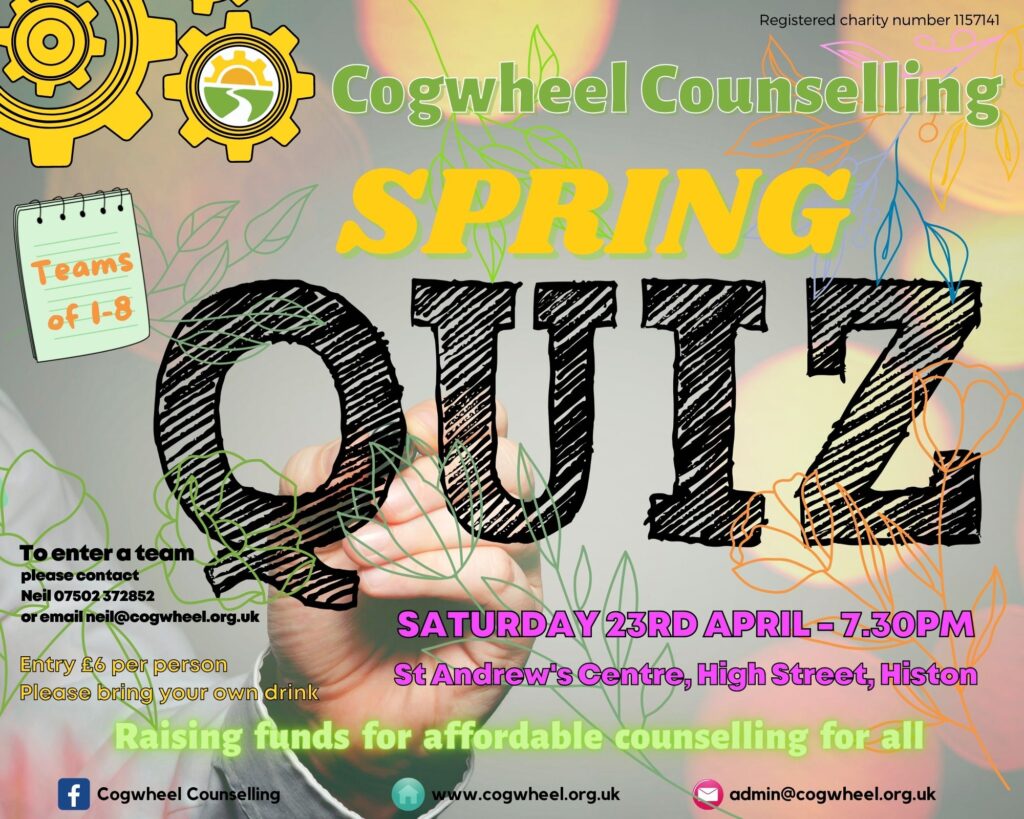 Following their entertaining quiz last autumn, quizmasters Chris and Sarah have kindly agreed to put our knowledge to the test again. The Cogwheel Spring Quiz takes place on Saturday 23rd […]

Thank you to our Cambridge Half Marathon runners! 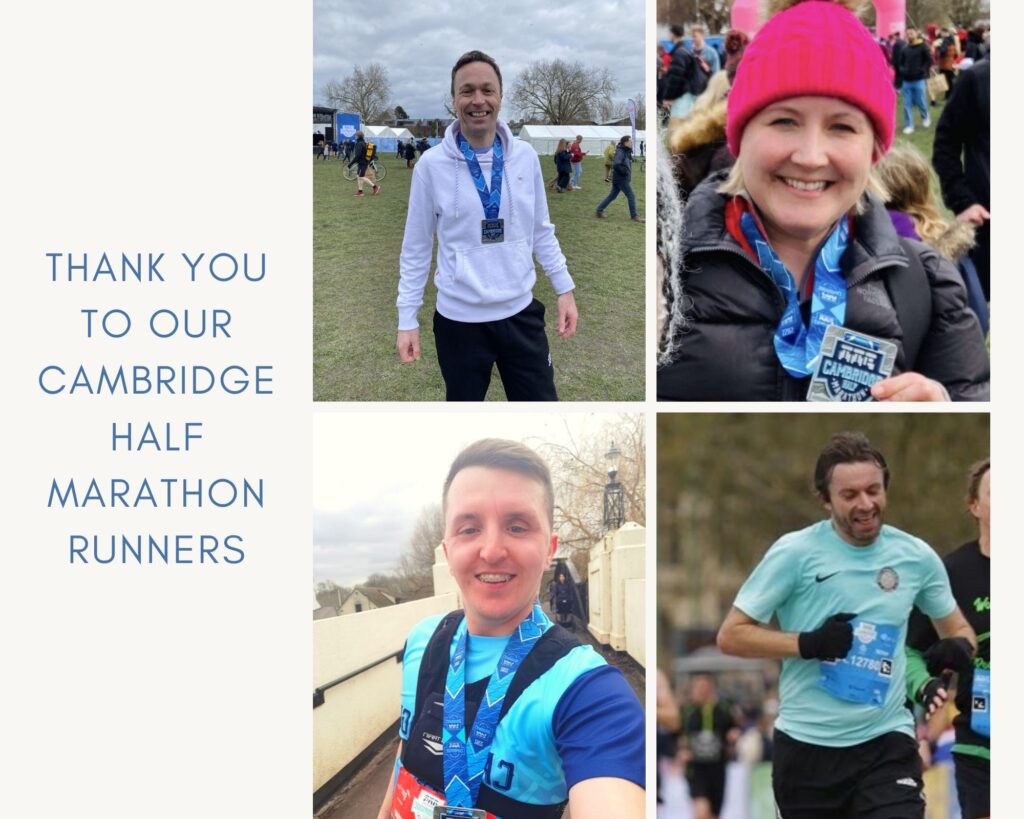 The Cambridge Half Marathon took place on Sunday 6th March and Cogwheel was delighted to have a team of 8 runners taking part to raise funds for us. Several of […]

Book your place at the TTP Cambridge Half Marathon 2022 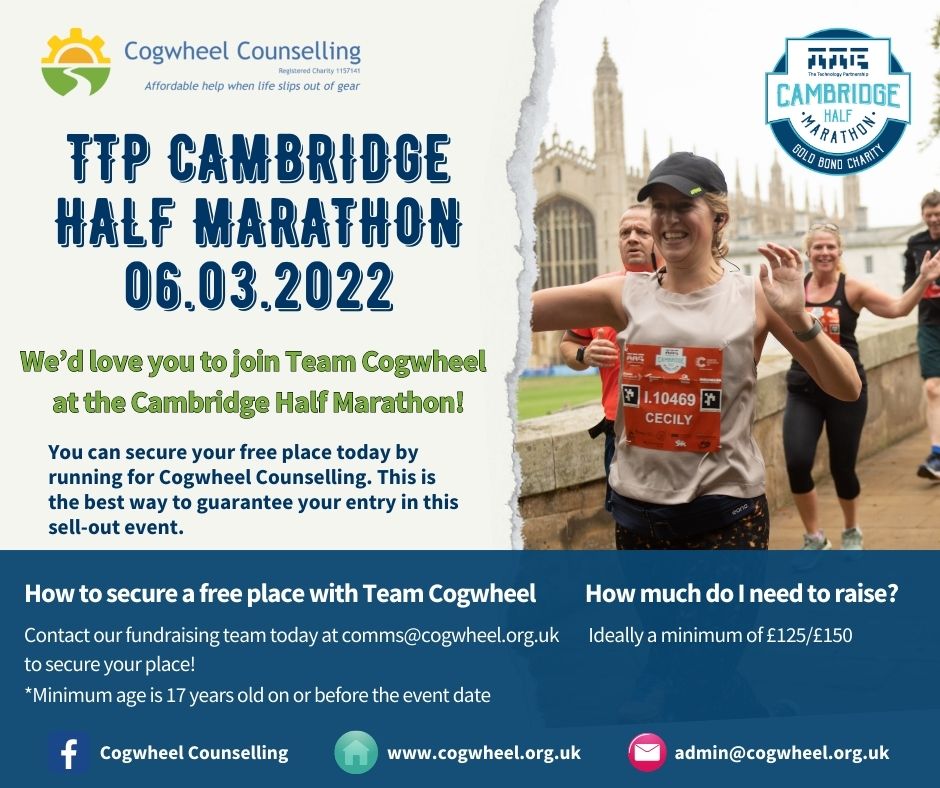 We’re excited to announce that we have secured five spaces for Team Cogwheel at the TTP Cambridge Half Marathon taking place on 6 March 2022.  Places are provided free of […] 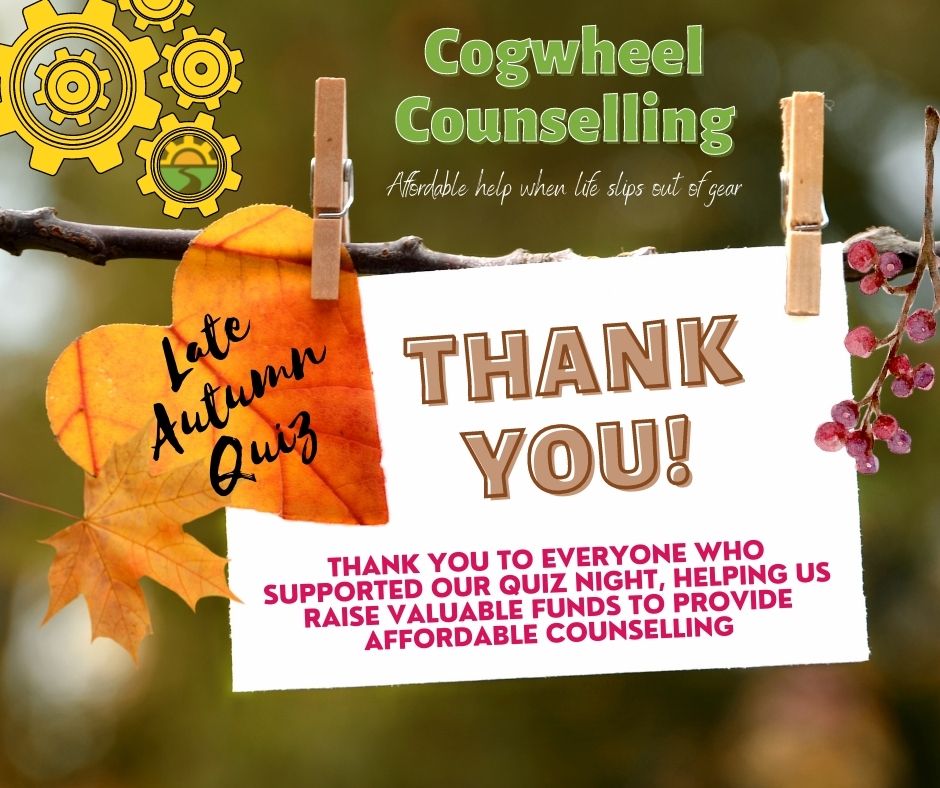 On 20 November, seven teams battled it out at the Cogwheel autumn quiz, testing their knowledge in rounds that covered literature, films, and a particularly entertaining music round featuring local […]

Time to get your running shoes on! 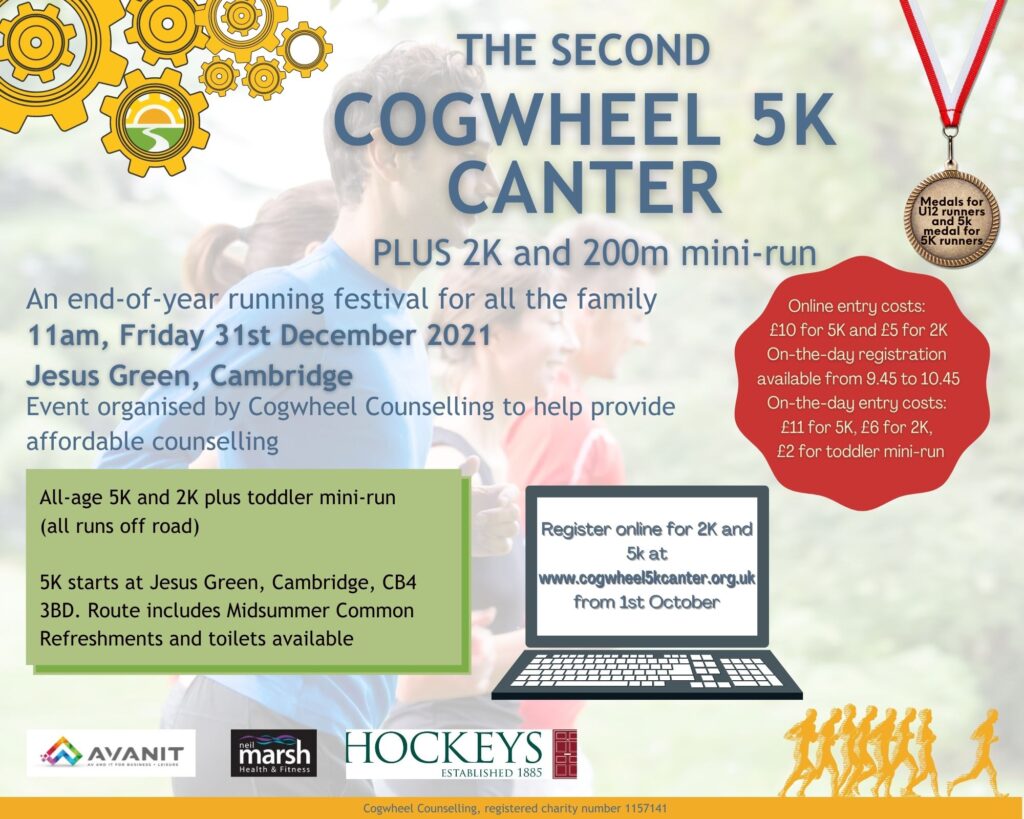 Registration is now open for the second Cogwheel Canter Running Festival, to be held on 31 December. Featuring a 2K fun run and 200m toddler mini-run alongside the headline 5K […] 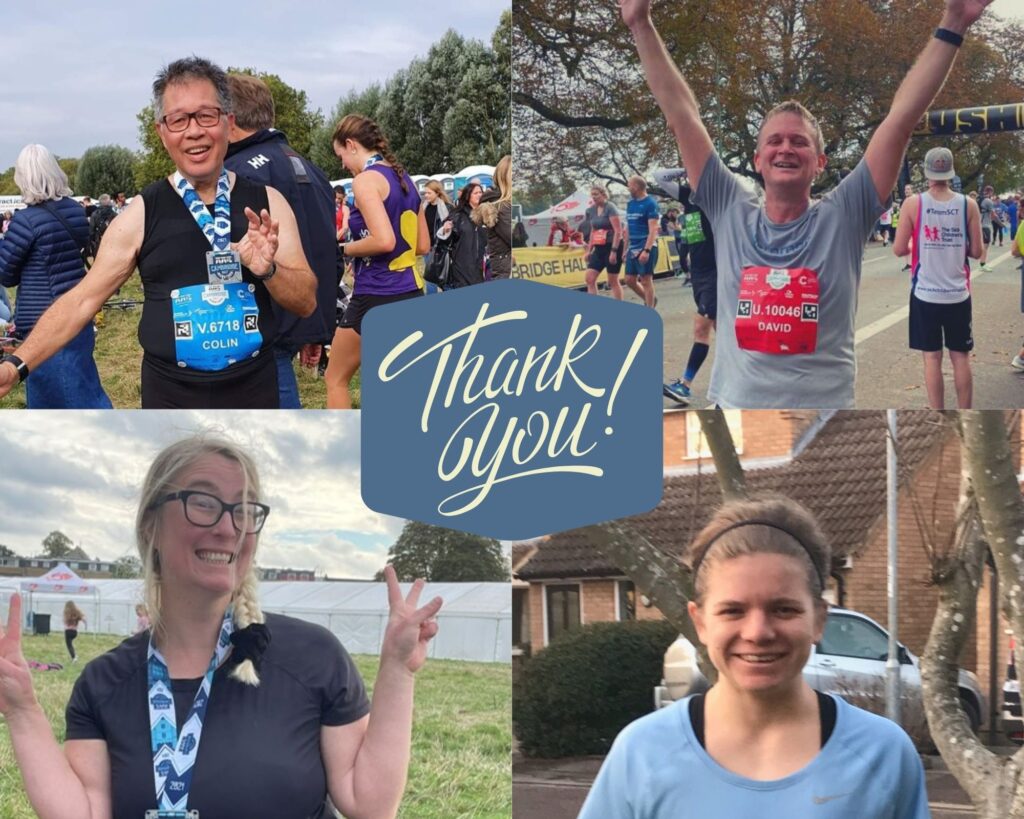 Cogwheel was delighted to have a team of 6 runners taking part in the recent Cambridge Half Marathon to raise funds for us. Between them, the team raised a fantastic […]

Join us at the Cogwheel Late Autumn Quiz 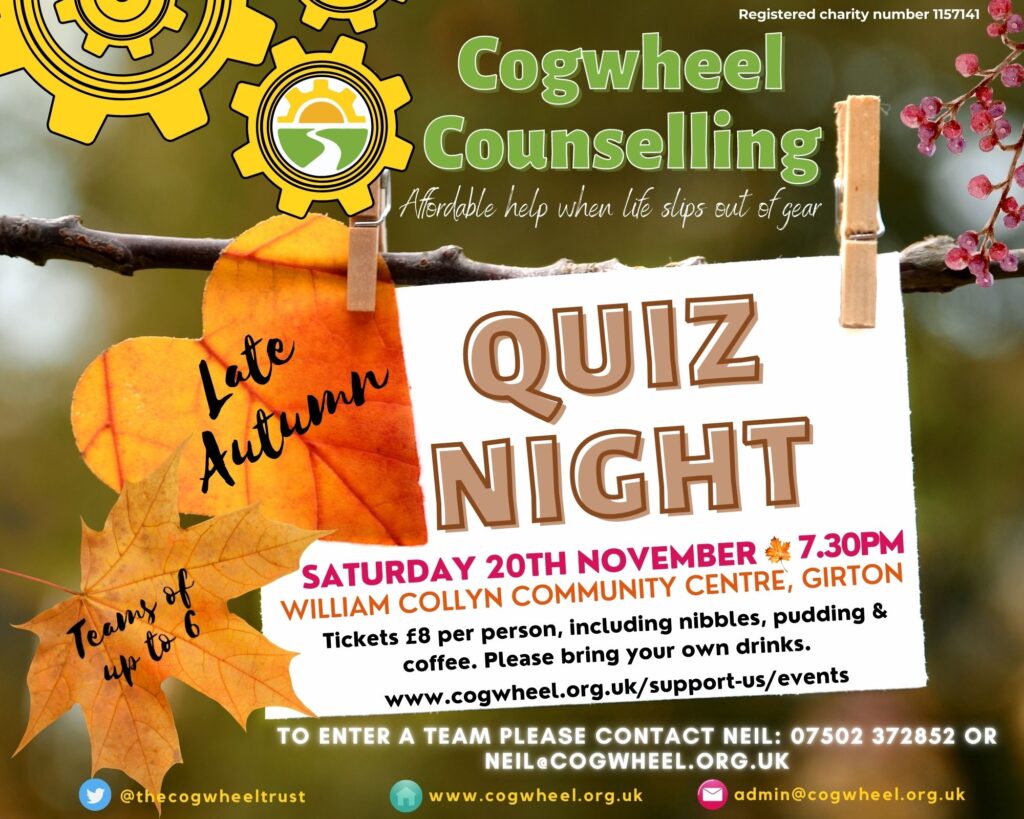 Calling all quizzers! Come and test your knowledge at our Late Autumn Quiz Night. Taking place on 20 November at William Collyn Community Centre, Girton, the quiz will raise funds […]

Cogwheel Counselling was the charitable beneficiary from the East Anglia Timber Trade Association’s annual dinner held at King’s College in September and has received a wonderful donation of £2500. Our […]

We use cookies on our website to give you the most relevant experience by remembering your preferences and repeat visits. By clicking “Accept All”, you consent to the use of ALL the cookies. However, you may visit "Cookie Settings" to provide a controlled consent.
Cookie SettingsAccept All
Manage consent

This website uses cookies to improve your experience while you navigate through the website. Out of these, the cookies that are categorized as necessary are stored on your browser as they are essential for the working of basic functionalities of the website. We also use third-party cookies that help us analyze and understand how you use this website. These cookies will be stored in your browser only with your consent. You also have the option to opt-out of these cookies. But opting out of some of these cookies may affect your browsing experience.
Necessary Always Enabled
Necessary cookies are absolutely essential for the website to function properly. These cookies ensure basic functionalities and security features of the website, anonymously.
Functional
Functional cookies help to perform certain functionalities like sharing the content of the website on social media platforms, collect feedbacks, and other third-party features.
Performance
Performance cookies are used to understand and analyze the key performance indexes of the website which helps in delivering a better user experience for the visitors.
Analytics
Analytical cookies are used to understand how visitors interact with the website. These cookies help provide information on metrics the number of visitors, bounce rate, traffic source, etc.
Advertisement
Advertisement cookies are used to provide visitors with relevant ads and marketing campaigns. These cookies track visitors across websites and collect information to provide customized ads.
Others
Other uncategorized cookies are those that are being analyzed and have not been classified into a category as yet.
SAVE & ACCEPT
Powered by